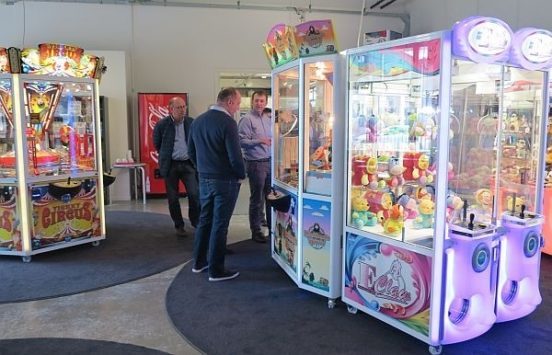 When the production department at Elaut found it more and more difficult to keep up with the increasing numbers of orders, they decided to change their strategy. QRM (Quick Response Manufacturing) offered new insights for greater transparency, shorter lead times and better predictability. Also whilst reducing stress levels, reducing the need for overtime and creating time to make continuous improvements.

Based in Sint-Niklaas in Belgium, the developer and producer of amusement and gaming equipment, sells its products around the world to amusement parks, carnivals, funfairs, casinos, etc. The United States is one of their most important markets. With the focus on their wide-ranging public and variety of markets – each with its own preferences and national legislation covering games of chance – the range of products that Elaut offers is ever so diverse. In some cases with many variations of the same game. In addition to this, it often involves small production runs within a growing product range. Many of the older games remain available for as long as there is demand.

The sales of Elaut’s range has increased over the past few years. Partly due to of the rise in the number of entertainment centers in the USA, which has in turn resulted in a sharp increase in turnover and more orders. The increasing sales have gradually taken production levels right up to the capacity limit. Delivery times were already pretty long and often unpredictable, resulting in having to give off longer lead times just to be on the safe side.

Freddy Huyghe, production manager at Elaut: “Our production procedures had to be continually modified and improved. For example, we used to work on the sub-assemblies at different specialist working areas, after which the various components would be assembled to make the actual unit. The problem here was the great variation in production times at these specialist areas, that in turn tended to make scheduling complicated. Neither scheduling packages nor intermediate stocks provided a solution and a new layout in accordance with the lean principles had little effect. Mainly because they did not apply to applications for products with many variations or large series. We therefore had to find another solution and this is how we came to QRM.”

Freddy successfully completed a QRM specialist course and soon identified a number of principles within the strategy that could be applied to the production department at Elaut: “Lead times are a very important issue and it also emerged that creating teams with the different operators and specialists was crucial to achieving the advantages offered by QRM. We moved over from finishing customer orders to daily orders, whereby at the end of each day the work on a number of machines was completed and the work for the next day was prepared. The system dynamics made it possible to carry on working despite the various types of products and components, each of which requiring a unique production time.”

The advantages of working in this new way were soon apparent: greater transparency quickly made it clear who was producing what and when. It also spread the workload more evenly, shortened the lead times and eradicated the need for intermediate stock on the work floor. Daily production became easier to anticipate and thanks to faster feedback, errors and defects were detected immediately. Significant work issues emerged and included the availability of all the components still needed from external suppliers and also selecting employees and creating teams with the right dynamics. The company would also like to shorten lead times even further where possible. They would like to hold limited stock, in order to deal better with any fluctuations of incoming orders.

Still a work in progress

Freddy: “QRM is actually a ‘work in progress’ as far as we are concerned. We eventually want to involve our suppliers and we are currently using any spare time each day to introduce improvements, opposed to starting preparations for the next day. Although up until now, this way of working has not yet been fully adopted by everybody in the company.”

There are even more QRM procedures scheduled for the future. The transition to self-managing teams, adapted layouts at the workplaces and creating Q-ROC’s in the offices – in order to achieve a QRM strategy that involves the whole company. This will result in being able to increase output with the same number of people and also improving delivery time predictions.

Freddy: “The credibility of our production has increased thanks to better predictability and shorter lead times. We also want to make it possible for everybody on the work floor to be aware of what they need to produce the next day. We have already managed to build-up a minimal stock, but in future we would like to shorten lead times even further. Indeed so short that we would no longer need to hold stock. We anticipate achieving the same turnover as the previous year, but without all the stress and overtime that was necessary in achieving it.”

Despite the positive results there is still much to be done in getting everybody into line. According to Freddy: “You really have to believe in the QRM strategy in order to get it working optimally. Being able to see past the initial criticism, continually informing staff and most importantly involving everybody in this new way of working.”