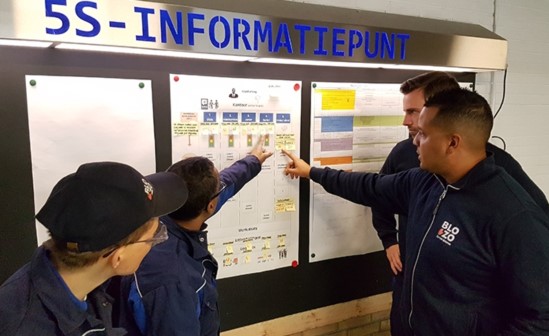 Much has changed in a year at metal company Blozo in Vlaardingen. Now there is peace in the workplace, more laughter and employees feel involved in everything that happens. Meanwhile, orders are being processed faster and better. Where previously there was a lot of overtime being worked or temporary workers being employed, now the output that is being realized with the regular team and within normal working hours is much higher.

These are the first results of the process of change that started exactly a year ago. Together with Censor, the foundation was laid for QRM, Quick Response Manufacturing. This is a business strategy that aims to optimize the company’s results by increasing the reaction speed and flexibility. The process and employees are being developed with a focus on lead time.

Characteristic in Censor’s approach: “people are at the centre and that works”, says Michael Röder, Strategy & Innovation Advisor at Blozo. “If you address the potential of the people in a positive way, ensure that they feel good about themselves and with a high level of work fulfilment, you will see that they are resilient and are capable of producing amazing performances.”

Blozo is in motion in every way. Both in the appearance of the company (new website and corporate identity), in the office (furniture for sitting and standing, flexible workstations and a new telephone exchange) and in the production environment; everything has been tackled. With an important factor to this being that the employees themselves have an influence on all developments, because that is how you create involvement.

Most visible are the changes in the workshop. The tool carts for each individual employee have disappeared. All tools now hang neatly on boards at the workstations, which are optimized according to the 5S method. Thanks to cross training, the employees can now be deployed in several areas. There are marked areas, lines and other markings on the floor, which indicate routes and where materials and work in progress must be placed. This makes it clear where everything is. This has resulted in an enormous reduction of the search times for tools and materials. 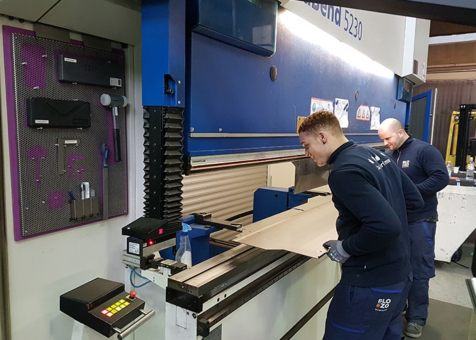 The processes within Blozo have been made transparent. Everybody knows how the orders flow through the production process.

In addition, the processes within Blozo have been made transparent. Everyone knows how the orders flow through the production process: which ones go fast, which ones flow slower, what the short or longer orders are. The employees are no longer overloaded with work which never seem to come to an end, but receive them in a dosed manner. In the morning the pallets with materials are placed ready for use, after which the team members will discuss how to process it. They consult with each other and make considered choices which, due to their craftsmanship, are done in an organised manner.

Once they have done their job, they will see the work stream away immediately to the next station. That produces a good feeling; a feeling that your work is important and contributes to the end-result. In addition, cooperation and cohesion between the various teams advance. If there are only three pallets in one team and twenty pallets in another team, workers will be transferred from one team to the other. The employees support each other where necessary. Departments have become teams without the imaginary boundaries in between. This creates flow, the foundation of QRM: the work flows as quickly as possible through the production process, with as little waiting times, congestion and packing moments as possible. There is far less interim storage, this is apparent at Blozo: in an area that was full of warehousing shelves, a fun corner has now been created for breaks; with dart boards, a table football and tables with benches. Furnished according to the wishes of the employees themselves.

The whole process fits naturally with trial and error. One employee picks up the changes more easily than the other, but the tipping point has long come and gone. Cynicism that was here and there at first, has given way to faith that the changes make work more fun and really yield progress. Michael Röder: “You push people outside of their comfort zone, but at the same time you offer them a safe environment, which makes them more daring. They are no longer afraid to fall.”

All tools now hang neatly on boards at the workstations, which are optimized according to the 5S method.

The customers are experiencing the changes too. Blozo wants to be a service provider for them that generates high-level solutions, with a short lead time and offering a good service. Whom it is a pleasure to do business. The customers have always appreciated the price and the quality of Blozo’s solutions, but at the same time indicated regularly that things could be done a little faster. Now that the lead times have been sped up, the orders can be handled quicker and the delivery times will continue to decrease. Among other things, this is due to the fact that there are far fewer disruptions. For example, the outage has been greatly reduced. Michael Röder: “Without specifically focusing on the disruptions, but purely working on the QRM-foundation, 60% of the disruptions have disappeared.

People no longer have to deal with peripheral issues but can concentrate on what really matters: adding value to the customers’ product. We can also switch faster due to this. We can now deliver a prototype or sample within one or two days, as opposed to a few weeks. At Blozo there was always a high willingness to find solutions for the customer and that has now only been strengthened. We are becoming an immensely flexible organization, offering solutions at an ever-higher level.”