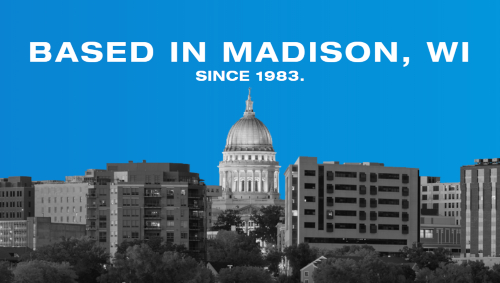 RenewAire is an American company that specialises in energy recovery ventilation units for the residential and commercial property markets. The units are available in more than 20,000 ready-to-use product configurations. A stone’s throw from the University of Wisconsin-Madison, where the QRM philosophy was developed by Professor Rajan Suri, RenewAire was one of the first companies to adopt it.

In 2018, after twelve years, the reason why we continued to implement QRM remained very clear:

• A 69% increase in turnover over the last three years
• The lead time is on average half that of the competition
• The overhead costs are lower than 15% of the turnover
• In twelve years, the total costs of workers have been reduced by 20%, while wages have increased by 60%

Before RenewAire began applying the QRM principles, the company was a minor player in the ventilation systems market. They wondered how they could compete with much larger companies possessing extensive research and development capabilities. Added to this were major planning concerns.

It was impossible to predict demand. When a client complained about delayed delivery, the order was given priority processing, but other orders were then delayed and ended up being late. RenewAire had thus created a negative spiral with an increasing number of complaints, an increasing number of hot jobs, and longer delays for other tasks. They had the feeling of being overwhelmed by stocktaking and did not think they would be able to continue running the company for much longer.

Thanks to the introduction of QRM, the emphasis was placed on the entire process from the order to the shipping phase and the company was able to remain in its premises for three more years. As a result they experienced a growth of 50%.

Between 2002 and 2014, the company generated spectacular results and increased its market share by 130% (doubled), increased revenues by 254%, and increased the total number of employees by 108%. The lead time in the workshop was reduced by 56 to 80%, depending on the type of product. The cost of the products dropped, while their quality increased. The profits largely outweighed the investments.

Since 2014, the application of QRM has been extended to the entire supply chain, from the quotation to invoicing.

In 2017, the internal waiting period had become so short that the external supply chain had become the limiting factor. This explains why RenewAire wanted its suppliers to reduce their MCT (Manufacturing Critical-path Time). As it was relatively small company, they had a limited purchasing capacity. Convincing the suppliers about the advantages of QRM, by organising training sessions, required considerable effort. Those who did not wish to abide by RenewAire’s philosophy, were thanked for their services and replaced by other, often closer based, suppliers.

The same year, the sector was confronted by a significant increase in orders. At RenewAire, the increase in the lead time was limited to 5 to 6 weeks, whereas the competitors’ lead time increased from 10, 12, to 26 weeks.

The implementation of the four QRM principles

Focusing on the reduction in the waiting period was the solution. This QRM principle aligned their objectives with those of their clients. Furthermore, the principle contributed to creating close ties between the people in the company. All the departments now work had in hand.

Multidisciplinary teams were established for the targeted market segments. These teams were responsible for the entire order process, from sale to production scheduling and distribution.

Likewise, the production methods have significantly changed. Large assembly lines with a great deal of intermediary stock were replaced by QRC (quick response cells), operated by two to five employees. Assembly only commences when it is certain that the product can be finished.

A certain overcapacity was deliberately created to reduce queuing. Free time is devoted to improving processes and training.

The following observations were made during a visit to the company:

• Each morning, RenewAire holds a brief stand-up meeting. During which any problems are presented and discussed. This enables any relevant problems to be addressed in fifteen minutes and the working day gets off to a good start.

• The QRM production cells are managed via a physical planning chart. Hence, red and blue flags are used to indicate planning-related delays and, if necessary, trigger overtime.
• In its production processes, RenewAire works with maximum batch sizes which are rigorously adhered to.

• There is virtually no work in progress (WIP) on the production site. Here, the rule is ‘never begin something that you cannot immediately finish’.

• Great emphasis is placed on intensive cross-training and ways of motivating employees to attend the courses. Thanks to cross-training, the team collaborators learn how to identify the product families and can therefore carry out as many tasks as possible, and mutually support and assist one another. Cross-training is stimulated by a rewards system based on earning stars, in which the employees themselves are encouraged to take the initiative. They endeavour to acquire new skills.

The difference with the European approach

American companies tend to work with spare capacity, which enables them to cope with problems with greater reactivity. The employees can be deployed with great flexibility (fewer specific functions are assigned in the workshop) and during less busy periods they are involved, amongst others, in the cross-training program.

Consequently, they continually improve and increase their flexible employability. In Belgium, companies generally do not operate with an internal reserve capacity and temporary workers are hired during busy periods. However, this means that the permanent staff have less opportunities to work towards continuous improvement, because they are always working at 100% of their capacity.