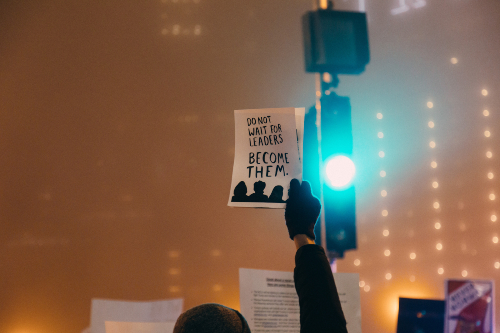 Welcome to the new reality…

The current worldwide COVID-19 sanitary crisis speaks for itself. From a business perspective, this new reality is profoundly changing not only how organizations do business, but also how business leaders lead in the face of a VUCA environment.

The skills and abilities leaders once needed to help their organizations thrive are no longer sufficient. In this new VUCA reality, more strategic complex critical-thinking skills and agility are required of business leaders. This new leadership is a real differentiational factor in QRM; the Quick Response Manufacturing / Management company-wide growth strategy, that uses time-based competition in order to create a competitive advantage in a VUCA world.

The new VUCA reality is born, and new VUCA leaders need to be developed. With vision, understanding, clarity, agility to counter volatility, uncertainty, complexity, and ambiguity.

Inspire to become a VUCA leader and take a competitive advantage with QRM agility and sign up for the QRM Institute leadership courses!

The notion of VUCA was introduced by the US Army War College to describe a Volatile – Uncertain – Complex – Ambiguous environment.

This was first applied by the Pentagon in order to name the terrorist attacks on September the 11th, 2001. A few years later it was used by strategic business leaders to describe the chaotic, turbulent, and rapidly changing business environment, that has become the ‘new reality’.

What characterizes a VUCA environment is not so much the disruptive dislocating technical revolutions, such as Gutenberg’s introduction of the printing press or Apple’s spread of iPhone’s, but it is more the speed and the breadth in which the disruption holds. In that respect, the COVID-19 crisis generates a typical VUCA environment, with half of the planets population confined (breadth) for a number of weeks (speed).

What is the meaning of VUCA acronym:

The ‘V’ in the VUCA acronym stands for Volatility.
Volatility can be defined as the nature, speed, volume, and magnitude of a change that is not in a predictable pattern (source : J. Sullivan – 2012).

This represents turbulence; a phenomenon that is occurring more frequently, and more rapidly than in the past. Typically, market demands in many businesses were already more and more volatile and unpredictable prior to the Corona virus crisis, and will be even more volatile after confinement.

The ‘U’ in the VUCA acronym stands for Uncertainty.
Uncertainty can be seen as the lack of predictability in issues and events (source : P. Kinsinger & Walch – 2012).

Past issues and events cannot be used as predictors of futures outcomes due to volatility. As a result, forecasting becomes extremely difficult and decision-making highly challenging for most of the leaders.

The ‘C’ in the VUCA acronym stands for Complexity.
Complexity is the difficulty to understand causes and mitigating factors (both inside and outside the organization) involved in a problem (source : J. Sullivan – 2012).

The layer of complexity, added to the turbulence of the change and the absence of past predictors, adds to the difficulty of decision-making and leads to confusion.

The ‘A’ in VUCA acronym stands for Ambiguity.
Ambiguity is the result of the confusion mentioned above. The lack of clarity about the meaning of the change, slowing down the decision-making process up until the point of the status quo being frozen.

As a leader, I have personally faced VUCA environments on a number of occasions. For example, leading Mars Inc. pet food operations in the depth of the 1998 Russian economic crisis, transforming the business unit for Valeo Automotive in Reims in 2005, and exploring new territories in mining at Davey Bickford in 2009.

Together with my teams I learnt that to survive in a VUCA environment, you need to develop new skills. Such as leadership agility and adaptability, that makes VUCA leaders different and stronger than other leaders. In a sense that they possess more complex and adaptive thinking abilities, in order to take a competitive advantage of VUCA environment, and ultimately grow their organizations.

What is the meaning of VUCA acronym:

‘Status Quo is not an option’ – A VUCA leader’s motto I frequently use :
The new leadership skills that distinguish VUCA leaders, were developed by Bob Johansen in his book ‘Leaders make the future: Ten New Leadership Skills for an Uncertain World’.
B. Johansen explains that traditional leadership won’t be enough in a VUCA environment, and proposes that the best VUCA leaders are characterised by vison, understanding, clarity, and agility.

Volatility can be countered with Vision.

In turbulence times, shaping a vision is even more important than in normal times. To counter the turbulence while keeping the organization’s vision in mind and pass through the economic downturns, or to face new competition in the markets.

Vision is also going to be vital in seeing and showing the ultimate ends needed to reach with meaning. Also to build a solid ‘WHY’ as an anchor to anyone in the company, in order to embark the adaptive transformation needed.

In a QRM transformation, shaping a vision is the first key to identifying strategic variability from the market. As well as dysfunctional variability from the organization, and define target market segments (TMS), which are the most sensitive to lead time reduction associated with high variability.

Uncertainty can be countered with Understanding.

To be effective in a VUCA environment, leaders must learn to look and listen beyond their functional area of expertise, to make sense of the volatility and to lead with vision. This requires leaders to communicate with all levels of employees in the organization, and to develop and demonstrate collaboration skills.

There is little chance that you will understand the complexity of turbulence from your own perspective, but likely you will get a better chance to listen and learn from a wide network of competencies. To enlarge the horizons and envisage new opportunities.

What really makes the difference in a QRM transformation, is the ability of an operational transversal team to better collaborate by using agile and effective communication in a QRM Cell structure. To adapt and react quickly to permanent changing demands from clients.

Complexity can be countered with Clarity.

In a VUCA environment, chaos comes rapidly and hard. There is a sense of urgency to clarify which strategic orientations you want to explore and focus to get out of the chaotic situation as quickly as possible, keeping consistency with your vision.

In a QRM transformation, MCT-mapping will show how time flows through the organization. In average, 95% of the time is useless (the so-called white space in QRM terms), and only 5% is useful (the so-called grey space) from the view of the order. By teaching teams to understand root causes of white space, this will clarify which key orientations you will need to focus on in order to reduce lead times by a minimum of 50%, or an average of 80% (as proven by thousands of successful case studies).

Ambiguity can be countered with Agility.

Agility is the ability to communicate efficiently across your organization, decide and move quickly to apply solutions (source : P. Kinsinger & Walch – 2012).

In a QRM transformation, agility is the driver. In a nutshell, QRM agility consists of 3 ingredients:

• Simplification: always try to simplify the way you operate, e.g. reducing the number of interfaces.

• Keep the flow moving: don’t work faster, but better together by reducing white space in your processes on the critical path.

• Collaborate better together: be more autonomous. Acting and deciding on a daily basis is a great starting point.

Last but not least, in the face of a VUCA environment, as a leader you will need to decide what type of company you want to be: ‘The Quick or the Dead’ – Andy Grove – ex Intel CEO – 1992. This statement was the source of my inspiration. Being engaged with my teams and leading agile transformations. Or when founding QUICK RESPONSE ENTERPRISE (a leading organization that spreads the QRM philosophy throughout France), helping companies become agile and to grow in a VUCA environment.

In the face of VUCA new reality, leadership development activities need to focus less on behavioural competencies and more on complex thinking abilities and mindsets.

From the source of N. Petrie – 2011, the VUCA leadership skills that need to be developed are:

• Learning agility. Meaning to communicate, decide and act quickly across the organization (inside and external)

• Developing self-awareness about strengths and weaknesses as leaders

• Demonstrating adaptability and openness to change

• Being a fast learner and acquire complex strategic thinking abilities

As a way to sublimate VUCA leadership, the QRM Institute training courses are not traditional class courses. They are more experiential courses, based on scenario planning and powerful learning simulations to experiment on potential future situations. How the organization would react or not react to certain events, and to practice simulations in a safe and non-threatening virtual environment. Developing collaboration and encouraging thinking out of the box, by trying new things and learning by doing and improving.

However, to survive in a VUCA world, organizations must do more than hire and develop agile leaders: they must create a VUCA culture that rewards innovation, agile behaviour and calculated risk-taking. Few agile transformation experiences taught me that developing adaptability and agility creates values through people; such as mutual aids, trust and ownership. Guardians for long-term sustainability.

By promoting and rewarding agile leaders, companies will attract and retain the type of innovative and agile talent that businesses are seeking. It will also provide businesses a competitive advantage in our ever-changing and fast evolving marketplace, which is the ultimate VUCA new reality – the world in which we live now!